Politics & Intrigue from the Great Beyond — an Alan Zarrow Walking Tour

In honor of Election Day, I am concentrating this month’s Walking Tour segment on some very strange political stories and the people associated with them.

We begin at Green-Wood Cemetery and our first stop is NYC Mayor William Jay Gaynor (Section 7) who was the victim of an attempted assassination on August 9, 1910 (8-9-10 for all of you numbers people) and amazingly survived a bullet in the neck. Although he was considered a highly-regarded candidate for either governor or even president, he was not even put up for nomination by his party for another term as mayor. He died in office in 1913 from an apparent heart attack – not from his wound. Someone else who died in office — on February 11, 1828 in Albany — was New York Governor DeWitt Clinton (Clinton Dell section), shown behind yours truly. His uncle, George Clinton, while serving as the nation’s fourth vice president, also died in office. Hmmmmm. Bad genes? DeWitt was originally buried at Woodlawn Cemetery in New Windsor, NY, along with his uncle George, but was re-interred at Green-Wood.

John Young McKane (Section 146) was known as the “Czar of Coney Island” and his exploits could fill a book. He was a strong supporter of Grover Cleveland in the 1884 presidential race and it was widely suspected that he had a hand in some election irregularities. He was eventually convicted in 1894 of election fraud in the local Brooklyn contests of 1893. (THIS guy’s biography should be a story for one of Ron Schweiger’s future talks – hint, hint.) Grover Cleveland (the only president to be elected to two NON-consecutive terms) is buried in Princeton (NJ) Cemetery along with Vice President (and dueler of Alexander Hamilton) Aaron Burr and university founder Paul Tulane. Ron Schweiger is shown here in front of the Leonard Walter Jerome’s Green-Wood mausoleum (Section 37). Who is Leonard Jerome and why are we talking about him in an article about politics? Leonard was the father of Jenny Jerome, who was the mother of Sir Winston Churchill.

We will take our leave of Green-Wood with the story of Teresa Sickles. While she was not in politics herself, her husband, US Representative from New York Daniel Sickles, was. The Sickleses lived in a row of houses across from the White House facing Lafayette Park (in the same row of houses as Henry Reid Rathbone, the army officer who accompanied Abraham Lincoln to Ford’s Theatre). Daniel found out that Teresa was having an affair with Philip Barton Key (son of Francis Scott) and publicly shot Key in front of the Key residence located on the other side of Lafayette Park (near the home of William Seward, who was gravely wounded the night Lincoln was shot). Daniel was tried and found not guilty by reason of insanity — the first successful use of such a defense in a case like this — and went on to have a command at the battle of Gettysburg, where his leg was shattered and ultimately amputated. He donated his leg to the US Army Medical Museum (where it is still on display – just ask Bonnie Greenbaum) and it was said that he visited his leg on every anniversary of the amputation. Teresa died in 1867 and was buried in an unmarked grave in the Sickles plot here at Green-Wood. Unmarked, that is, until just this past summer when a marker suddenly appeared – pointed out to me by the sharp eyes of our own Lori Pandolfo.

Moving from Green-Wood to upper Manhattan, we meet the one and only NYC Mayor Ed Koch (“How’m I doing?”). Koch is buried in the Trinity Church Cemetery Uptown on Broadway and 155th Street in the section that houses the cathedral. Also in that part of the cemetery is bird expert John James Audubon. On the other side of Broadway you will find the Astor family, Clement Clarke Moore (“T’was the night before…”), and Jerry Orbach.

We come back across the East River to Calvary Cemetery in Queens, where we have Carmine DeSapio (Section 27), who was known as the last real boss of Tammany Hall. During his tenure, he was accused of having ties to organized crime and was influential in replacing unpopular mayor Vincent Impellitteri with Robert Wagner. The Wagner family is also in Calvary (Section 45), approximately 50 yards to the right from Governor Alfred E. Smith. Our final stop this month is New Montefiore Cemetery in Farmingdale, where we find Abe Beame (Section 4, Block 6), NYC’s first Jewish mayor and Ed Koch’s predecessor. Unfortunately, he was on the receiving end of the now-famous headline, “Ford to City: Drop Dead.” Yep – some strange stories. Again, I can’t thank enough the people who came with me on my journeys, and thank you to the folks at Green-Wood, who encouraged people to do the walking from the beginning.

(Text and photos by Alan Zarrow. The photo of Alan with DeWitt Clinton is by Miriam Mishkin) 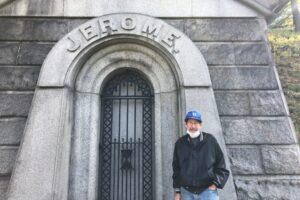 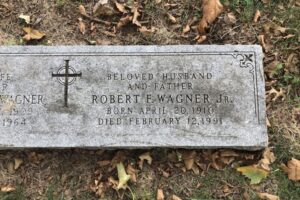 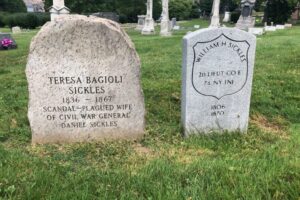 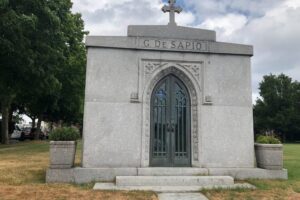 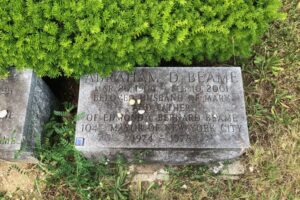 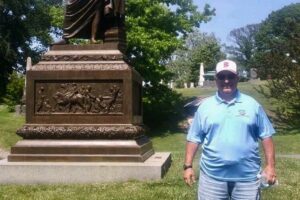 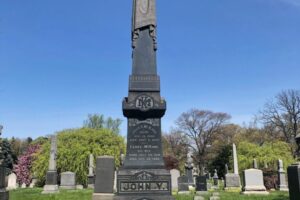 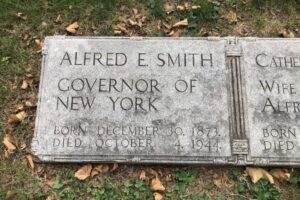 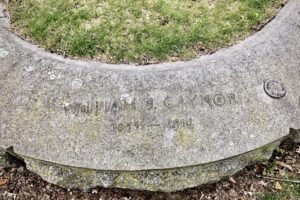