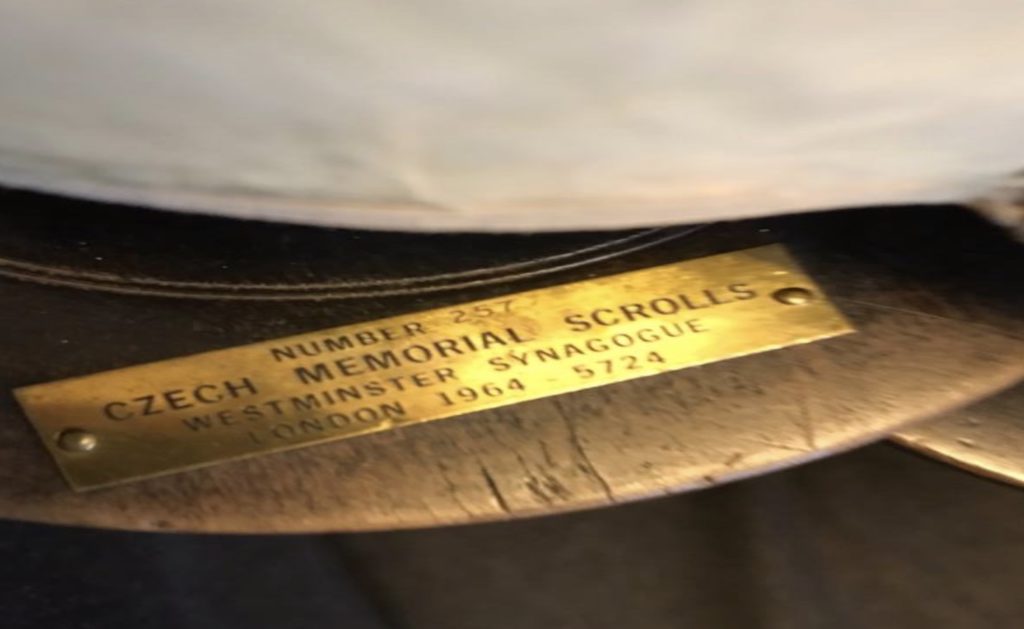 About our Czech Torah

In 1939, the Nazis invaded Bohemia and Moravia, lands that were part of Czechoslovakia (now the Czech Republic). Jewish-owned businesses and synagogues were shut down. In 1942, the Nazis issued an order that all historically valuable Jewish artifacts be sent to Prague. Some of the Jews of Prague advocated for other ritual items to be included, and they were. As a result, in addition to silver and textiles, 1800 Torah scrolls were sent to the Jewish Museum in Prague.

After the war, about 50 Jewish communities were re-established, but didn’t last long, because when the government became Communist in 1948, most of the communities were shut down again. The Torah scrolls were stored in a ruined synagogue outside of Prague.

In 1964, over 1500 scrolls were purchased and sent to England. There they were restored and catalogued, and the Memorial Scrolls Trust was established. Scrolls were then distributed to congregations around the world. The communities don’t own the scrolls; they are custodians of them. If a congregation merges with another congregation that also has a Czech scroll, one is supposed to be returned to the Trust. Every scroll had a plaque identifying it as a Czech memorial scroll, though over the years records have been lost and some communities don’t even know they have one of the Torah scrolls.

That was the situation for our Czech Torah scroll; we didn’t know we had it. It seems that one of the communities that received custody of a scroll was Progressive Shaari Zedek here in Brooklyn. When Progressive Shaari Zedek merged with Temple Beth Emeth in 1990, the scroll remained with the combined congregation, but along the way the information about the origin of the scroll was lost.

Some years ago, Temple Beth Emeth v’Ohr Progressive Shaari Zedek decided to donate a Torah scroll through Project Keshet, which promotes and supports Jewish women’s leadership in Eastern Europe and also sends Torah scrolls to Jewish communities in that region who need them. Project Keshet sent a sofer, a scribe, to evaluate the scrolls we were willing to donate. One of the scrolls we showed the scribe was what we now know is a Czech memorial scroll. The sofer looked at it and said that it’s not possible to restore it, because all the ink is faded. He said, “I’d buy that one from you for $100 and give it to the guys in my shop to practice on.” Thank goodness we didn’t take him up on that.

Our congregation is custodian of scroll number 257. It is the largest scroll we have, so we have not used it on a regular basis—it’s rather unwieldy. However, knowing what we know now, we have begun to use it for all of our b’nai mitzvah celebrations at B’ShERT.

Torah scrolls are the most important sacred objects that we have. As I often say, they record the best evidence we have of what God wants from us. Many of them have a long history as well, and unfortunately, we know little about the Torah scrolls we house. It is wonderful that we now have some information about one of them, to enhance our experience of using the scroll.