FILM & DISCUSSION for the Eve of International Holocaust Remembrance Day 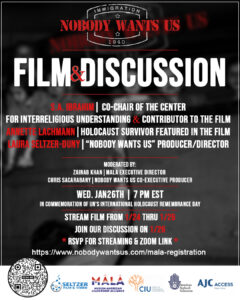 Tomorrow there will be a virtual screening of this moving 37-minute film, which will be followed by a discussion and Q & A with the filmmaker, Laura Seltzer-Duny, S.A. Ibrahim Co-Chair of the Center for Interreligious Understanding & contributor to the film, and Annette Lachmann Holocaust survivor featured in the film.⁠

⁠.
“Nobody Wants Us,” tells the story of how the Jewish refugees aboard the ship were able to find safety in America, thanks to the determination and kindness of strangers—including the women of NCJW and Eleanor Roosevelt. ⁠
.
Moderated by:⁠
Zainab Khan, MALA Executive Director & Chris Sacarabany, Nobody Wants Us Co-Executive Producer⁠
.⁠
RSVP: https://www.nobodywantsus.com/mala-registration
.
#FilmScreening #refugees #NobodyWantsUs #InternationalHolocaustRemembranceDay⁠
⁠
« Hanukkah Gifts that Give Back When God Looked Down and Wept »